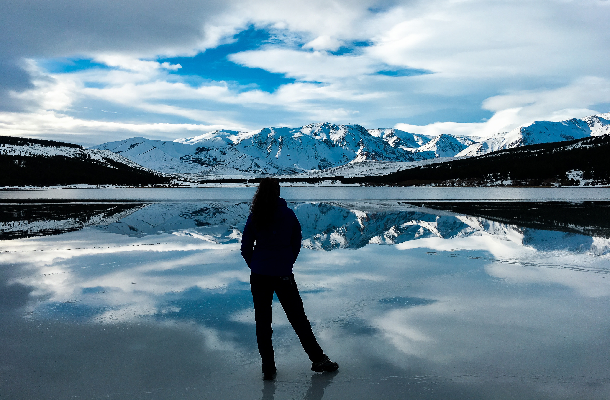 In this chapter we get introduced to a young, eight-year-old Gisela Benitez. It’s a wintry day in the Northern Third and she’s wet and freezing while sitting in the snow by the frozen lake. She’s crying and her neighbors who have passed by, a father and son, are trying to console her. The father says “Nobody could have fallen in the lake,” which lets us know that something inexplicable has happened to put Gisela in such distress.

We do a quick time jump backwards to just moments ago when Gisela and her mother arrive at the lake to go ice skating. We’re introduced to the term lusae, which means magical creatures, as they come across a ceffyl, or horse that can control water. There’s also a line that serves as a teaser to the larger forces at play in this book:

Once the ceffyl is gone and it’s safe to skate, Gisela is quick to leave her slower mother behind and get on the ice. Once she does, she’s startled when a wispy voice calls out to her. After investigating, she falls through the ice, and her mother successfully saves her. They think all is well, but as soon as Gisela turns her back, she hears a splash. She looks back to see her mother is gone and the hole she fell through it completely frozen once again. She frantically cries out for her mother while hearing the voice again, saying, “I’ll be waiting for you, Gisela…”

My goal with this chapter was to start this book off with a bang. I wanted you hooked with an intense scene that also started the job of worldbuilding. In addition to the list of terms in the above quote, I also have Gisela’s mom pleading to this world’s god, Elao, as she frantically saves her daughter.

I originally did not include the first section of this chapter – where Gisela is being consoled by neighbors. It had started with Gisela and her mom’s arrival to the scene. I strove for a lot of beautiful language to set up the scene including one of my personal favorites, “The sun hid behind the clouds, but peeked through from time to time as if watching events unfold and anticipating a scene it did not wish to witness.” But, even with all of that, it was brought to my attention that starting a scene off by describing the setting was impersonal. Readers connect to characters. And because of that, I decided to include that first scene so you got a better idea of who Gisela was. I made sure to maintain a tone of dismay to keep you anticipating the big tragedy that was soon to come.

Why You Should Love This Chapter

I think I did a good job of setting the tone for the narrative to come. With the whole ice skating rescue/tragedy scenario, I showed that I can keep you anticipating something big and deliver on that promise. There’s a trust I tried to gain with this opening chapter, and if I got it from you, you know that I’ll deliver on all the other breadcrumbs I left lingering.

Why You May Put Down The Book

If you find yourself uninterested at this point, it may just be a lack of polish on my part. This was my first book, and as such, regardless of how much I tried to hide it, there are probably some cracks that showed to the more avid readers or editors out there. You also may be confused about why Gisela and her mom rode in on horseback, but used some futuristic binoculars. That with the mention of wheelers, or cars, despite the explanation of why they hadn’t used one (they didn’t want to stir up any dangerous lusae) may lead some to think I don’t have a firm grasp on what kind of book this is. You may ask, “Is this like Lord of the Rings or is this more of an urban fantasy?” And to be quite honest, I’ve had trouble answering that question when asked face-to-face because the truth is, it’s a mixture of both. It’s an epic fantasy set in modernized times in a different world. So it’s not clear cut, and that may trouble some.

Looking Ahead to Chapter 2

In the next post, I’ll discuss our introduction to the main character, Slade Maxwell, and dig into the inspiration for his character. Now I’m not saying Slade is me, but there’s a lot here that closely resembled my life – from my relationship with my mom, what I was expected to do after graduating college, and even the failures in my love life. Stay tuned for that. It might get deep.