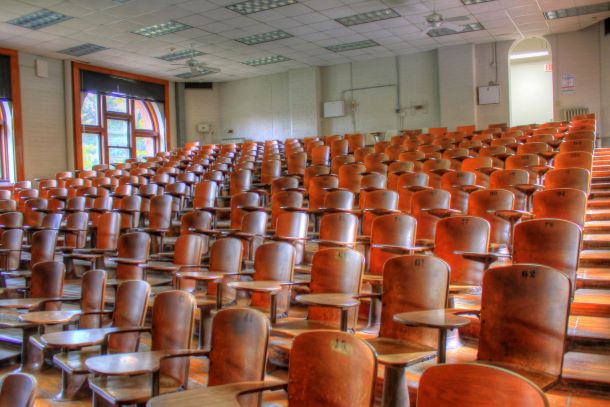 In chapter 3, we see Slade in philosophy class at Burrow University (BU). We learn that his best friend is Gisela Benitez, the same character from chapter 1, and that she’s a bit awkward. The class begins a discussion on the lore and creation story of Pangaea; how the world was created on the isle of Ether. Ether is said to house the Djed Key and legend has it that if it were ever wielded by a human, that person would be granted the powers of their god, Elao. The only thing is, despite people having already searched all over the world, Ether cannot be found. There’s a peeling back of layers on other terms like lusae (dangerous magical creatures) and Ethereans (humans with magical abilities – of which the queen is one). And I touch slightly on the ancient tale of Elao and Calamity – a fight between gods that gave birth to the magic the lusae and Ethereans use. But, the real star of the show is the new character being introduced: Douglassaire.

He’s described as having massive arms, long legs, a deep voice, and coming off a bit arrogant to Slade. Douglassaire mentions that he may know of an Etherean that goes to school with them. This excites Slade and he wants to know more, but Doug hesitates to put his business out there just yet. By the end of the chapter, Slade finds himself even more intrigued by this new friend.

My goal with this chapter was to feed you just enough historical info to flesh out the world of Pangaea while still keeping it grounded in the story and relationships of these characters. I also had to introduce my third main character, Douglassaire, and get the larger story rolling. His mention of the possibility of a fellow student being an Etherean should set up a bit of mystery for you to make you turn the page. I wanted you to question who is this Etherean and what does Etherean magic look like? At the same time, I wanted to start dropping hints of the romantic element of the story between Slade and Douglassaire – and the potential problems for that, seeing how Gisela is so unwelcoming of Doug.

I think most people would enjoy seeing the friendship dynamics between Slade, Gisela, and Douglassaire play out for the first time. I also think most would have no problem picking up the hints I laid down about Slade’s attraction to Doug. They’re not explicit, but enough to make you go is he just sizing him up or is his feeling him? Many will appreciate not losing touch with Gisela after it may have seemed like she disappeared between chapter 1 and chapter 2. There are a lot of little breadcrumbs I leave here that should whet your appetite for answers.

I make a newbie mistake of head-hopping to the professor of the class for a moment. That may feel jarring to you. You may also dislike that nothing really happens. This is another setup chapter with a miniscule bit of movement forward in the narrative, and you may see now that the pace is not the same as or on par with other current fantasy novels. When I was writing this book, I had been reading a lot of literary fiction, so I think that had a lot of influence in how I structured this narrative.

In chapter 4 I discuss Douglassaire’s rivalry with fellow warrior, Lesech, as they train for a big battle. Lesech definitely makes a big impression. Stay tuned for that.